At first glance, getting funding for a startup seems like the obvious choice. Building an asset with someone else’s money is generally perceived as ideal because there’s more of it with lower risk.

Obtaining funding for your company certainly can help you scale faster, but there’s another side of the equation that is much less known. What if your goals don’t include moving to the valley with a potential IPO? What if your end game is stability, or to spend time with your family?

That’s called bootstrapping and it’s about retaining ownership (control) of your company and generating profits. It’s the model we’ve chosen for Hubstaff.

In this growth post, I’m going to delve into the reasons we choose to remain bootstrapped instead of securing funding from outside investors.

After building Hubstaff for approximately three years we’ve gotten more than two dozen messages related to funding. When we first started getting them we were excited and would respond immediately. We took it as a sign we were on to something useful that others would want to take part in. We began receiving these calls when we were making less than $15k in monthly recurring revenue (MRR) (this was before we went revenue transparent).

Some of these calls were awesome because we were able to talk with senior-level executives who offered us valuable advice. We spoke about the tools other companies were using, reducing churn, and the industry overall. However, most of the time the person we got on the other end of the phone was a junior associate trying to reach out to a lot of different companies that may be a fit. Most of them asked us to get back in touch once we hit $100K in MRR.

This led to internal discussions between my co-founder, Jared, and I. We aren’t at the benchmark mentioned above yet, but as we approach it we’re starting to wonder why we would need more investments at that point.

All of these calls taught us some important things about funding. These investment firms are looking for proven businesses and operators with limited risk. We get that, but when we reach $100K in MRR what are the real benefits for getting added funding? The majority of the risk would be gone by then. On the flip side, we’d have to give less equity to get the cash. But would it be worth it?

Begin with figuring out what your mindset is

As with most things in life, it’s not black and white. There are advantages and disadvantages to taking funding and there is no right or wrong answer. When making a decision in business, one of the things I’ve learned is to begin with the end in mind and then work backwards.

What do you really want?

I have two little boys who are 3 and 5 years old. I want to coach t-ball games, spend time with them playing Legos, and truly get to know them. I don’t want to spend my time commuting to an office and working until 11 p.m. each night. It’s not worth it to me.

When we started Hubstaff, our goal was to have a business that did a few million dollars in revenue annually. We wanted to create freedom in our own lives through the software product that we would build, and the sales that software would produce.

We thought there may be some spin-offs of Hubstaff that we would create together, which could also produce a few million annually, but we never had the intention of creating a massive VC-backed company that was going to be the next Uber. (By the way, kudos to all that Uber has accomplished. We just didn’t choose to go that way.)

Startup success is often equated with money and VC investment, but there are other ways to measure it Click To Tweet

The startups that are commonly covered in the news are all raising money, so that may be what the public equates with success. However, there are successful startups (many of them remote) that are profitable and retained 100% by the owners. That’s what we’re aiming for. These businesses are very common, but they don’t often make the news.

Jason Fried of 37 Signals (now Basecamp) put it best when he said; “Look at what the top stories are, and they’re all about raising money, how many employees they have, and these are metrics that don’t matter. What matters is: Are you profitable? Are you building something great? Are you taking care of your people? Are you treating your customers well?”

At Hubstaff, we’re bootstrapped and we’ve got a great feeling of pride from building something with our own funds and those generated from the sales of our product. And we aren’t the only ones. Here’s a list of other companies at 37 Signals that are bootstrapped and proud.

Note: Want to know HOW we managed to stay bootstrapped so long? Read this post on how we pay our contractors.

You don’t need hundreds of thousands to get started

As I’ll get into below, most founders start looking for funding because they think they need it. The investment that Jared and I put into Hubstaff from our own personal funds was $26,000 each. We started with $52,000 to get the initial product built.

$26,000 is not a lot of money to put into a startup, but I realize that not everyone has that kind of money laying around, so what do you do?

Partner with your opposite skill set. This allows you and your partner to do what each of you are good at, and neither of you gets paid until the business is profitable. This is very common. Dharmesh Shah said it well when he said that the optimal number of co-founders for a startup is 2.09. Typically you want someone to cover marketing / operations and someone to cover development. This is the way we work at Hubstaff and it works well to this day (more than 3 years later).

Most of the capital that we used to start Hubstaff was to build the initial desktop apps because neither of us had expertise in that area. I was running the marketing and operations of the company, Jared was building the server side code (ruby on rails), and we had 2 developers building the desktop applications for Windows, Mac, and Linux.

My point is that we built a very complex product that required three native desktop programs to be built for a total out-of-pocket investment of $26k each.

If you don’t have $26k or don’t want to risk it, then you most likely have the ability to raise it from private investors, family or friends. The main point is that you don’t need to raise several hundred thousand in a seed round. Raising a large seed round will take a lot of time and attention that could be put towards your product and marketing instead.

Time and attention are one of the big reasons that we have not sought funding to this point, but there are a few others as well.

Reasons that we’ve not pursued funding

Looking back on it

Let’s try to figure out what life would be like if we had taken on some investment when we were at $20k MRR.

Here are more examples of what is typical in a seed round from Angel List. 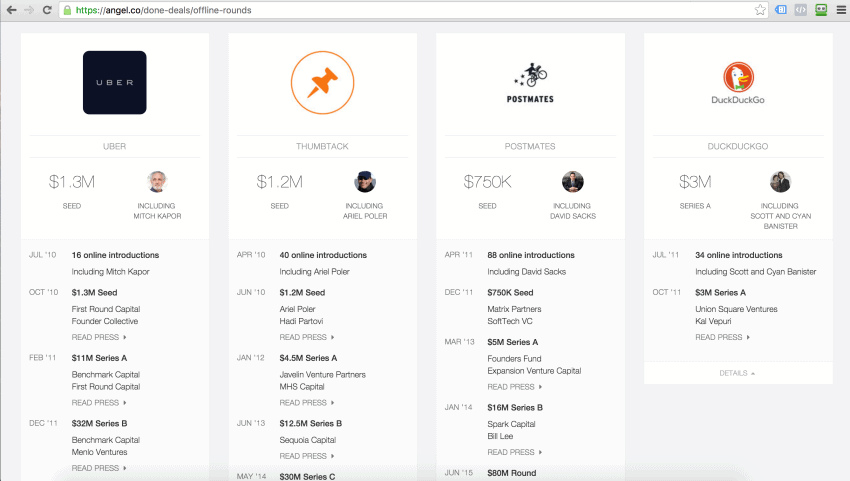 Let’s take a minute to examine what it would look like if we were to have raised the same $1M at the same pre-money valuation of $4M.

Here’s a good article on valuation explanations and formulas.

Hubstaff would have had $1M in cash to operate with and would have given up 20% of the company to make that happen.

Here are some of the feelings and thoughts I would have at this point:

The immediate thought in our case is to invest in the product, which Jared and I have discussed before so it wouldn’t be completely new. We would have most likely hired more developers earlier to beef up the product and design. We would have had an iOS app earlier, potentially an invoicing system, shift enforcement, more integrations and a better product overall.

We also would have taken probably 10% of the money and invested in various forms of advertising and sponsorships (making sure to track the conversions and profitability of course). All said and done, we would have probably spent about 10% on advertising to try to find a profitable channel so we could scale up growth.

Would we have been better off with funding?

Many smart people have given me the advice to grow without funding if at all possible. I imagine that people have this thought process for three main reasons:

I’ve been advised that the best way to do this analysis is to look at where we would be 3 years from the date of the funding with and without the funding.

Here’s a Google Sheet that does just that. This simple plan assumes:

Again, all of these numbers are variable and estimated. I felt that an extra $1,000 in MRR (22% more than without the upgraded product) was fair and what we could expect to receive given the product enhancements. This is also based on linear growth, which has been how we’ve grown so far, so we feel it’s the most accurate model. You can see it here:

What are your thoughts on running a bootstrapped company versus accepting venture capital? We understand that bootstrapping isn’t for everyone, just like getting investments wasn’t for us. Share your stories and advice below.

Small Business Marketing Doesn’t Have to Be Hard: 20 Simple Tips